The construction of Puerto Bolivar will be awarded to a Turkish group, Rafael Correa reported 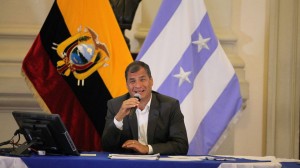 The award of Puerto Bolivar (Machala) to a Turkish group , said Tuesday President Rafael Correa on the occasion the official visit of Turkish President Recep Tayyip Erdogan to the country.

“There are significant Turkish investments that wish to come to the country. For example, for the construction of Puerto Bolivar. The deal it’s almost closed. The award of Puerto Bolivar to a major Turkish consortium,” the president said during a discussion panel with reporters.

Regarding the visit of his Turkish counterpart, scheduled for Thursday, Correa said: “agreements will be signed, -if the term is correct- business of mutual benefit will materialize.”