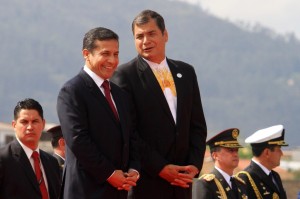 The President of Peru Ollanta Humala and his counterpart from Ecuador, Rafael Correa, will strengthen the social integration policies and infrastructure in both countries during the presidential meeting that will be held in Arenillas on October 30, announced on Saturday October 25 Humala.

He stated that the meeting between presidents will serve to deepen the axes of the binational agenda and to strengthen the confidence “between two peoples that are brothers.”

In addition, he advanced that will be projects of the two countries in terms of tourism and social inclusion will be discussed.

The Peruvian President said that his government builds along with Ecuador access roads in the mountains area of Piura, “while Ecuador does the same in his territory.”