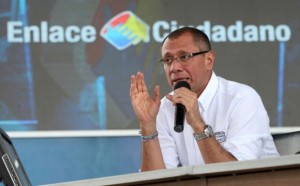 The change of the productive matrix begins to yield positive results in the trade balance, according to the Vice President Jorge Glas during the weekly address where he replaced President Rafael Correa.

Along with the Minister of Industries, Ramiro González, Glas said that there are 905 agreements with private companies to boost their growth and, thereby, reduce imports.

In dollars, according to Glas, the reducing foreign purchases reaches 400 million dollars.

From Manabi, Glas said that the possibility of a meeting of vice presidents of the region is under study. The appointment will meet next year in Ecuador. The aim is to share development experiences and show the challenges of each country.