Philip VI bets on “a renewed monarchy for a new time” 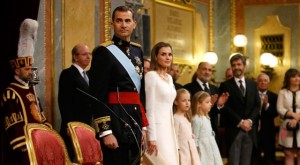 Philip VI was proclaimed King of Spain in the House of Representatives, preceded by a military parade.

From his perception of  how should be the Crown, the king now offers “a renewed monarchy for a new time”, as mentioned in his speech.

The need for a democratic regeneration has also been presented in his speech, as his vocation to help the effective presence of Spain in the world.

The representatives of the Mixed Group and the Plural Left did not attend the ceremony because of their disagreement with the monarchy institution.