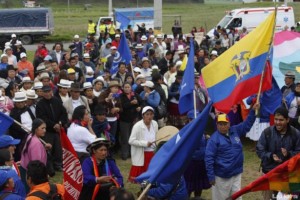 The first Plurinational People Parliament was established in Loja, after twelve days of mobilizations against the Water Law, organized by indigenous groups.

These parliaments will aim to “take action” on issues that the group considers  as a violation of the rights of the community, said Carlos Perez Guartambel, Ecuarunari President.

Gerónimo Yantalema, a member of the indigenous movement, added that for each Parliament it has been constituted a committee to collect the positions on the issues discussed and the approaches of legal actions that will later be taken to the National Parliament in Quito.

Ecuador and Chile will have electrical interconnection in 2020

CNE prepares amendments to the Code of Democracy