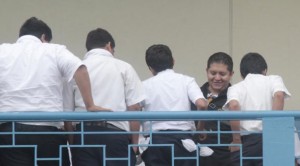 The National Police and the National Police Department for Children and Adolescents (Dinapen) have begun the police operations in schools, after the Governor´s office of Guayas on Monday, which is chaired by Rolando Panchana, invited to the launch of the campaign called ‘Preventive Revolution’.

The aim is to combat drug use and that the project gradually extends to other 25 cantons. It also seeks to eradicate informal gatherings of teenagers, where according to the National Police, narcotics are consumed.

The first phase of the program is to deploy police operations within schools. During these actions, workers of the Police and the Prosecutor will enter classrooms to check backpacks, holsters, seats, school supplies and snacks the students bring.

The school where police raided yesterday is under the administration of an intervener from a year ago. In 2013, the Ministry of Education intervened it because of allegations of misconduct and alleged drug consumption and merchandising in this school.

The commander of the Zone 8 of the Police Colonel Edmundo Moncayo, explained that in the requisition were found “catalogs of the products that we are fighting”, referring to drugs.