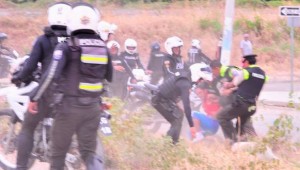 Police scuffle with residents of the Cooperative Socio Vivienda 2 during the anti-drug operation.

With insults and attacks with stones and sticks, a group of residents of the Cooperative Socio Vivienda 2, in the northwest of Guayaquil, tried to prevent the action of police and agents of the Narcotics Unit, who yesterday raided five homes to arrest suspected micro-traffickers.

The police action was carried out in response to complaints made to the phone number 1800-DRUG (376-427), that indicated the presence of an alleged criminal network dedicated to the sale of narcotics in the sector.

In the exterior of a house located in the block 1, several policemen acted against insults and protests of women that prevented the agents to detain their relatives.

A struggle started the moment when the policemen sought to take away a stick with nails to a woman. The action originated the intervention of other dwellers, so incidents continued.

While clashes took place in the street, a few meters away, inside a home, several agents were raiding it, minutes before they apprehended a citizen there who hastily got out of that house with a quilt in his hands in which the agents discovered two hidden blocs of marijuana.

Prosecutor William Aguilar said that several people did not understand the work being undertaken and that is why they acted violently and prevented the police work.

“As we saw, some of them (women) reacted differently trying to stop these people who are committing crimes from being arrested,” said Aguilar.

Marcos Zapata, head of the Narcotics Zone 8 Unit, said that the operation was executed because there was a band of micro-traffickers in the sector that was using the that housing development as a collection point of drug that was later expended in various areas of the city.