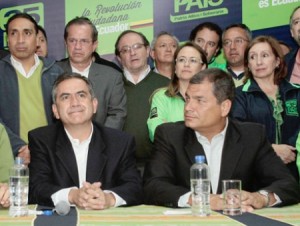 The assemblymen of Alianza Pais (PA) will suggest tomorrow at the Convention of the movement, in Esmeraldas,that the National Directorate is composed of delegates from all provinces. So said it the first Vice President of the Legislature, Rosana Alvarado (AP) yesterday.

The one hundred Assembly of AP had planned to define a position in this regard, last night during a meeting with the Minister of Social and Economic Inclusion ,Doris Soliz, who is in charge of the Executive Secretariat of the Group and is a possible successor to Galo Mora.

Alvarado recalled, however, that in the Convention of tomorrow will treat several issues, including changes to the Statute allowing continuous training, rules on the formalization of partnerships with other groups and the definition of nominations.

By the way, María Alejandra Vicuña stated that it is intended to strengthen the political organization.

Meanwhile, Soliz said yesterday in Teleamazonas that will install multiple artboards and that one of them will discuss the election issue.

Also will be discuss, she said, possible agreements with parties such as Avanza or the Socialista, which is one of the “points of divergence” that exist.