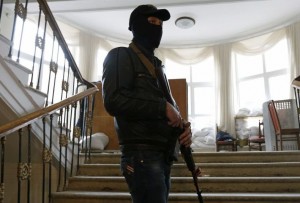 The institutional weakness of the Interim Government of Ukraine has been revealed this Wednesday. The country’s President openly acknowledged the absolute loss of control over the eastern regions, Donetsk and Lugansk in the hands of pro-Russian activists.

The statements of the Head of the interim State, Alexander Turchinov, also leave the door open to not held the elections of May 25 because the state of anarchy that lives the eastern region.

‘Honestly, today the security forces are unable to secure control of those two regions. The police force is powerless, looks away or directly works with the assailants. It is difficult to assume, but it is so,’ Turchinov said at a meeting with the governors.

Accesses to the north and south of the city are plugged by two checkpoints, shared in practice by regular and insurgents forces.

Ukrainian Prosecutor accuses Yanukovych and collaborators of carry off $ 32,000 million