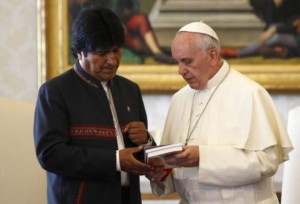 Bolivia’s President Evo Morales revealed on January 4 that Pope Francis requested him information of Bolivia on the centennial maritime claim to Chile, on the eve of the visit of Catholic leader this year to the country.

Morales was asked if the Pope Francisco could mediate the Bolivian-Chilean differendum, after the successful efforts of the Vatican in thenormalization of relations between the US and Cuba.

“I´m not sure about the Pope, although he asked documentation, I delivered him documentation, the book that we did,” Morales said, referring to the so called “Blue Book” containing the historical and political justifications of Bolivia in its claim to Chile of a sovereign output to the sea.

The Bolivian president confirmed last month that the pope will arrive to Bolivia in 2015, although there is not a precise date for his visit. Morales expressed his hope that the presence of the Pope serves to accompany Bolivia to boost its international agenda.