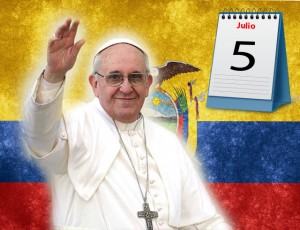 Pope Francis will visit Ecuador from 5 to 8 July.

This Friday, the Ecuadorian Episcopal Conference released the itinerary of Pope Francis during his visit to Ecuador. The Pope will arrive at Quito’s Mariscal Sucre Airport on July 5 at 15:00, the welcoming ceremony will be held there, in which the Pope will give his first speech. Other public events are not expected for that day.

At 9:00 of Monday, July 6, the Holy Father will fly to Guayaquil. At 11:15 he will officiate a Mass at the Divina Misericordia Shrine. Then, he will have a private lunch with the Jesuit community at the Javier High School.

In the afternoon, at 17:00, he will depart to Quito to visit President Correa, in Carondelet, at 19:00. Then, he will head to the Cathedral of Quito where he will meet with the believers in the Plaza Grande.

At 10:30 of Tuesday, July 7, he will officiate a Mass at the Parque Bicentenario, located in the north of the city. In the afternoon, at 16:30 he will meet with educators at the Universidad Católica, while he will meet with representatives of civil society at 18:00 at the San Francisco church.

He will conclude his agenda on Wednesday July 8, with a visit to nursing home of the Missionary Sisters of Charity, in Tumbaco. Then he will go to the shrine of the Virgin of El Quinche, where he will meet with priests, the clergy and seminarians at 10:30.

That same day, at 12:00 he will leave for La Paz, Bolivia as part of his pastoral tour in Latin America.

U2 plays in a subway in New York “disguised”