Minister of Interior announces that the Diplomatic pouch case is clarified 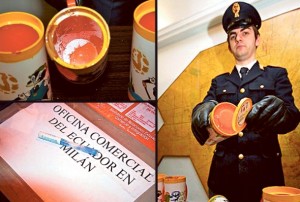 Interior Minister Jose Serrano through his twitter account announced that the case of “Diplomatic Pouch” that came to Italy  in 2012 with 40 kilos of drugs, is clarified with the arrest of three involved parties who operated from Ecuador.

“Investigation that has taken over three years is clarified thanksto the good work of the Anti-Narcotics Directorate in coordination with the Prosecutor …” (sic), Serrano posted on his Twitter account.

In the coming hours details of the investigation process will released, which according to the secretary of state, has remained unpunished. It was on February 9, 2012 that the narcotics police of Italy reported on the seizure of 40 kilos of cocaine in a diplomatic pouch of Ecuador.