Prefect From Zamora Rejects the Label Given to “Illegal” Miners 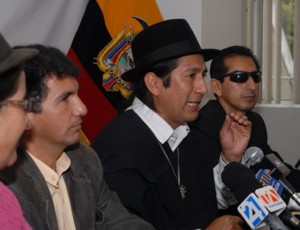 “If they say miners from our province [Zamora Chinchipe] are not registered, then start the prosecution processes to those who did not apply the Mines Bill. One of the statements on it ios the cense for people who have been working for two years on that labor” Affirmed Salvador Quishpe, Prefect of Zamora, with Assemblyman Kléber Jiménez, from the Pachakutik Political Party.

The announcement comes after allegations from President Rafael Correa who affirmed the miners were “justified” to be evicted from the Province because they’re harming the environment and because they migh even be related to money laundering.

“WIth this argument that the miners are illegal, they’re sending thousands of policemen to repress us. We’re being blame for the environmental pollution, and it’s true, it happens since 1980, just like in Nambija. The government brought gold there and, what is the Ministry of Environment doing for the families of the miners?” Added the Prefect.

Confrontation Between Policemen and Workers Leaves Injured in Ecudos