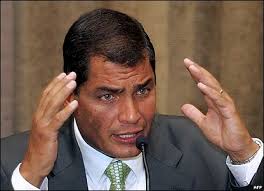 President Rafael Correa still showing their displeasure toward the caricatures of Xavier Bonilla, Bonil, through his Twitter account. Correa post: “If someone can DECENTLY hold that his ‘caricature’ (Bonil) was ‘humor’, I will apologize to whoever… Young people: do not be fooled! Infamy is a shame even with pictures… “.

And he noted the adoption of communications law, which in his view, “prevents to judge on holders (or drawings) of the press. Imagine if this happens to any of you by a ‘caricaturist’ with hate ‘. “

The Superintendency of communication (Supercom) ordered Bonil to rectified the cartoon published on 28 December last, referring to the RAID on the home of the Legislative Advisory Fernando Villavicencio. Both this journal and Bonil fulfilled the sanction last Wednesday. And, in fact, the Superintendent Carlos Ochoa was compliant with that.

Yesterday, the lawyer of the cartoonist, Ramiro García, said that next week they will present a protective action to “the rights of freedom of expression of Bonil”.

Meanwhile, at the international level, media as El Nuevo Herald, USA.UU.; O’globo, of Brazil; Le Monde Diplomatique, France; and El País, Spain, showed their solidarity with Bonil because of the penalty imposed by the Supercom.

Uruguay will not receive planes of Ecuador