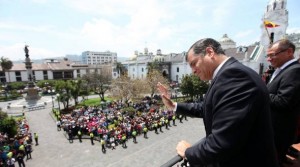 After his tour in Qatar and Switzerland, President Rafael Correa returned to his activities on October 27. After his arrival at the Mariscal SucreInternational Airport on October 26, in a press conference, he highlighted the agreements between Ecuador and Qatar.

On Monday morning he was in the changing Guard ceremony in the Carondelet Palace. This event was attended by Vice President Jorge Glas, who replaced him last week in his functions.

Correa said that the Qataris were impressed with the investment projects which presented by the country, especially in the areas of oil, mining, tourism and real estate.