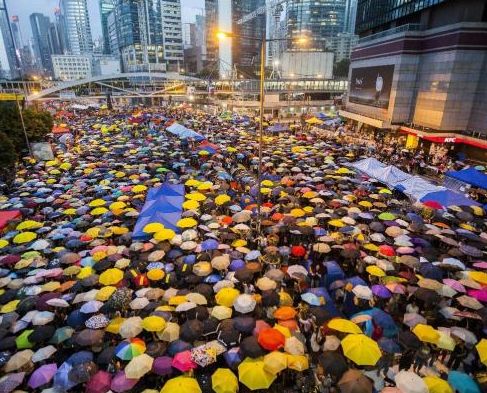 Hong Kong’s Admiralty district, the center of democratic protests in the former British colony, was the meeting point this Tuesday of thousands of people with open umbrellas to commemorate a month since the start of the protests against the local government.

Attendees opened their umbrellas, many of them yellow, color which also symbolizes the revolt, at 17:57 local time (9:57 GMT), the same hour in which a month ago the Hong Kong police used tear gas against protesters and these defended themselves with the same objects.

Movement leaders cheered speeches from a makeshift stage to continue the struggle in an emotional ceremony in which a banner with the slogan: “I want real democracy,” was displayed, written in Cantonese.

“After a month here, we at least got that the people of Hong Kong see what is the real problem of this society and talk about it,” said Regina Lee, an unemployed, who since a month has been camping in the street, with hundreds of movement activists.

The protests began in response to the decision of the Chinese Communist regime, adopted on August 31, to grant universal suffrage to Hong Kong for the 2017 gubernatorial election, with candidates chosen by a committee related to Beijing.