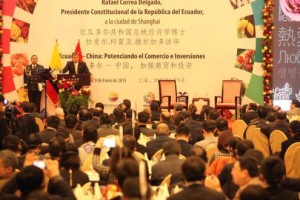 Ecuadorian President Rafael Correa concluded on January 9 his official visit to China, where he promoted the “benefits” of investing in Ecuador, according to state media.

Correa fulfilled activities in Shanghai and Beijing. The agenda included meetings with Ecuadorian and Chinese entrepreneurs and potential international agreements.

In the morning, Correa held a breakfast meeting with producers, exporters, managers of chambers and other entrepreneurs of Ecuador, who traveled together with the official delegation, reported El Ciudadano.

The president completed a state visit in which he sealed several agreements (economic, academic, financial, etc.), and met with the maximum Chinese officials, among these, president Xi Jinping.