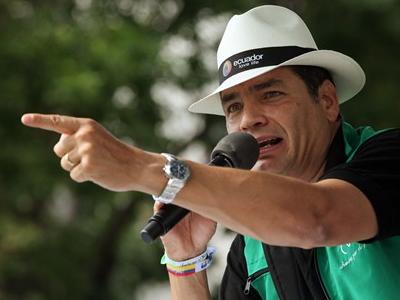 President Rafael Correa will visit on October 6 an area of the Yasuní National Park in the Ecuadorian Amazon, where it is planned to extract oil, an initiative that has sparked protests and even a lawsuit against Ecuador at the Inter-American Commission on Human Rights (IACHR).Foreign journalists were invited to the visit, with whom Correa will discuss several current affairs of Ecuador and Latin America, including the Yasuni project.

According to the President, this initiative will affect only two out of thousand acres of this natural reserve of high biodiversity, but environmentalists and civil society groups oppose to the exploitation of the subsoil and defend the holding of a popular consultation on the issue.

He also announced he will visit the area because he wants to “see how things are going,” as he pledged with Ecuadorian people, that high technology will be used to minimize the environmental impact of oil extraction.