President of the Constitutional Court postulates to integrate the IACHR 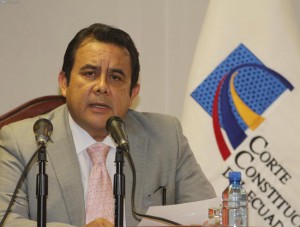 The President of the Ecuadorian Constitutional Court, Patricio Freire Pazmiño, postulated as candidate for one of the four vacancies that will be opened next year at the Inter-American Court of Human Rights (IHR Court).

The elections will be held in June and the authorities will come into office in next January.

Pazmiño is one of the five candidates that have been presented so far, among whom also are: the renowned Argentine jurist Eugenio Zaffaroni, Costa Rican Elizabeth Odio Benito (former judge of the International Criminal Court), the Chilean Vio Grossi and Uruguayan Pérez Pérez.

Ministry of Environment declares 180 days of emergency in Galapagos