President Rafael Correa deepens his criticism of the military 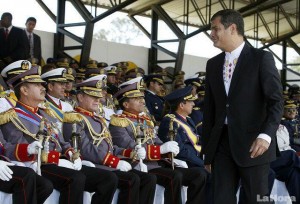 President Rafael Correa said yesterday that the existence of “armed representatives of the Armed Forces was “inconvenient for democracy,” when referring to the discomfort generated the debt of $ 41 million in the Institute of Social Security of the Armed Forces (ISSFA) for an alleged overpricing in the sale of 66 hectares of land to the Ministry of Environment.

Correa participated yesterday at a graduation ceremony for 2,322 teachers who obtained international masters degrees, in which he criticized the deposed military high command, and reminded them that their oath is to the homeland and not to an institution such as the ISSFA.

“… If they act as union leaders, then this is serious. Teachers can have their organization and their union representatives (…) but who of you have armed representatives?, that is totally illegitimate, inopportune, inconvenient in a democracy,” he emphasized. (I)