Princess Cristina will be judged by tax offenses 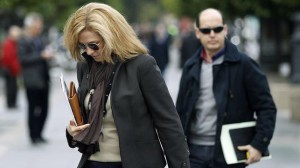 Princess Cristina of Bourbon, shall appear as a defendant before the court that will judge her as necessary cooperator in the tax offenses of her husband Inaki Urdangarin, as decreed by Judge Jose Castro on Monday, December 22.

Castro asks her 2.6 million euros of financial responsibility. The Princess will appear in Court along with 16 others, including her husband.

She shall be tried, so the alleged evidence two fiscal crimes is settled before the court, in a cooperative role of such frauds in 2007 and 2008, from which her husband is accused.