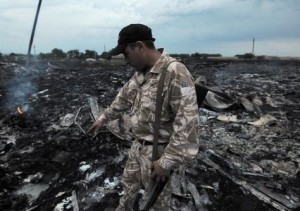 The pro-Russian separatist promised a ceasefire between two and four days to allow the remmants recovering of the Malaysian Airlines Boeing that crashed yesterday in eastern Ukraine, said the rebel leader Andrei Purgin to the Russian news agency Ria Novosti.

The rebels will allow access to the disaster area to officials of the Organization for Security and Cooperation in Europe (OSCE), the International Civil Aviation Organization and the Ukrainian researchers assured Purgin.

Meanwhile, the Russian Defense Ministry said that the Ukrainian missiles system was active yesterday, the day the plane was shot down.

The radar station connected to the Ukrainian missiles is 30 kilometers from Donetsk, not far from where the plane crashed, in the heart zone of fighting between pro-Russian separatists and the government, the Ministry said, without specifying whether there was a missiles launching.