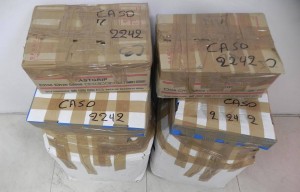 The prosecution is investigating possible links of a Polish citizen arrested last Monday in the Santa Elena province with 79,163 grams of cocaine found in a container on Sunday in the seaport of Guayaquil.

The foreign citizen, identified as A.O., who has worked at the prosecution and the Judicial Branch as a translator because she masters eight languages, was arrested while driving on the streets of the Santa Elena county, in the province of the same name.

Prosecutor Victor Gonzalez reported that the arrest of the Polish citizen, after the discovery of 1,841 packages of cocaine hidden inside a container loaded with vehicle spare parts that was bound for Holland.

“The drug was found among automotive parts (brake pads, air filters and motor oil), the alkaloid had been inserted inside the brake pads,” said the the prosecutor.

He said that after the detention of E.M.M., manager of the export company, it was disclosed that the owner of the goods was the a Polish citizen, 63.