Prosecutor demands prison for a defendant of Las Dolores case 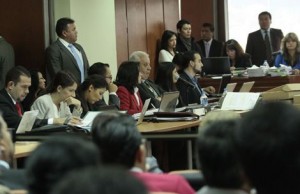 After nine days of hearing, the Attorney General of the Nation, Galo Chiriboga, began his closing argument.  Ie, he had to decide whether or not he accused the 11 involved in ‘Las Dolores’ case.

The official accused Erick S. as the author of constitutive extrajudicial execution in serious violations of human rights subsumed in murder. He did so covered by Section 450 of the Criminal Code. “Based on this article, the Prosecutor requested the sentence ranging between 16 and 25 yearsimprisonment”, he said. For today, Chiriboga shall complete his plea.

The session had some incidents. One witness, former Colonel Fausto Flores, did not appear at the hearing. So the rapporteur judge of the Criminal Court, Wilson Merino, who chairs the adjudication hearing in the case ‘Las Dolores’, suspended the proceedings until it is stopped and asked the Prosecutor to “take appropriate measures before a flagrant contempt offense”.

Fausto Flores, who worked as the chief of the Judicial Police of Guayaquil, during the police raid on November 19, 2003, in the pharmacy of la Alborada sector in Guayaquil, which ended with the deaths of eight people.

For this reason began the judgment of 11 police officers on active and passive service, including the former commander of Police George P., who ran the institution at the time of the events.