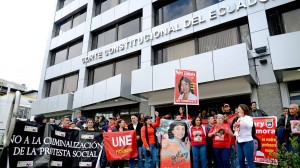 The request was made during the hearing of the appeal for extraordinary action brought by the prosecution against the appeal ruling, by which the sentence of eight years in prison for the crime of incitement to rebellion was annulled, of which Zamora was accused.

At the hearing, the lawyers of Mery Zamora participated: Juan Vizueta and Pedro Granja, acting as third parties and the attorney general.

Chiriboga said that in the resolution of the criminal division, according to him, constitutional rights were violated: the lack of reasoning in the judgment and inadequate enforcement of the legal syllogism (deductive reasoning).

According to the lawyers of Zamora, is impossible to reverse the state of innocence of their client since international law determines that only one rule can be reviewes when people face a conviction.