Cordicom accepted complaint against Bonil sustaining it in two reports 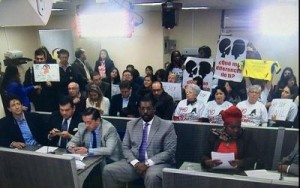 The Council of Regulation of Information (Cordicom) sustained through technical and legal reports, to accept the complaint submitted by fourteen Afro-Ecuadorian groups against cartoonist Xavier Bonilla (Bonil) and El Universo daily, by the publication of a cartoon alluding to Assemblyman Agustín Delgado.

In the drawing appeared the former soccer player saying: “With my speech everybody says ‘Poor Tin, poor Tin ‘ … But with my salary of Assemblyman: Nobody says ‘pobretón, pobretón’ (poor, but in a derogatory manner by its Spanish meaning)”.

The technical report, which is based on semiotic and linguistic analysis, concluded that “the analyzed communication content is discriminatory for socioeconomic reasons because through derision, mockery and vexation, a distinction was made against the citizen Agustín Delgado, which impairs the recognition or enjoyment of his human rights …. “

This is because “the word “pobretón” expresses disparagement … (and) by being located at the end of the speech it reflects an underlying opinion that leaves aside the polite tone of irony and prior criticism to expose a mockery. Such mockery acquires a pecuniary referentiality: salary and an identitarian referentiality (‘Tin’), a situation that reveals a derogatory qualification to Delgado by his socioeconomic status … “.