Protests continued in Brazil despite the inauguration of the World Cup 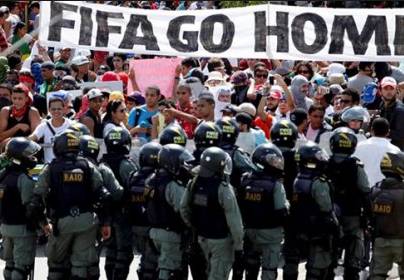 Hours prior to the World Cup inauguration, protests and demonstrations were resumed in Sao Paulo, home of the opening match, against the event that has affected Brazil in recent months.

Police dispersed the protesters with tear gas launches that did that made them quickly back several hundred meters. The mission of the authorities was that the protesters do not reach the surroundings of the venue where the opening of the world cup was being held.

In addition, a group of subway workers in Sao Paulo, also concentrated in the area near the stadium, protested against the government and claimed the rehiring of the 42 dismissed workers during the recent strike, declined on Monday which paralyzed Sao Paulo for five days.

Protests occurred not only in Sao Paulo but also in Rio de Janeiro, that host a manifestation of teachers. In Natal, north of the country, bus drivers went on strike too.

Young French dies after trying to comply challenge on Facebook