Putin plans to meet with Fidel Castro in Cuba 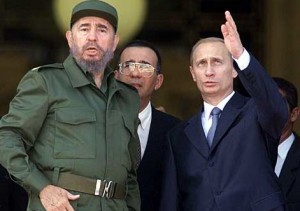 Russian President Vladimir Putin will arrive this Friday at Havana on an official visit to Cuba, to meet with his Cuban counterpart Raul Castro, as announced by an official source.

In Moscow, Yuri Ushakov, Putin´s adviser, said at a press conference that it is scheduled an informal meeting with the former leader of the Cuban Revolution, Fidel Castro.

“He is 87 years old, not exercising state or party charges but it is still the leader of the Cuban revolution (…) he has a great mental acuity and, of course, is of great interest to our leadership to talk with him,” said Ushakov .

Unofficially, it was known that during his stay, Putin will develop other activities, among which are the signature of a pack of ten agreements, of collaboration in the areas of culture, industry, commerce and healthcare.