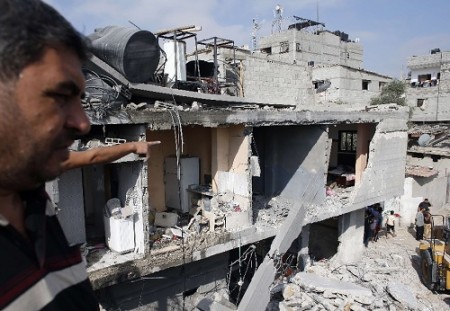 Around 80 homes and buildings have been destroyed in the last 72 hours of intense attacks.

According to medical sources, 70 percent of the 81 deaths so far during the three days of Israeli airstrikes in Gaza were civilians, including seven people -4 women and 3 children- who died early this morning during a house bombing in Jan Yunis, in the south.

Specifically, two-thirds of the victims are women and children who have been hit by Israeli attacks on civilian infrastructure, reported witnesses and Israeli organizations such as B’Tselem, which today reminded that bombing family homes of Palestinian militants “violate international humanitarian laws.”

Secretary-General of the UN Ban Ki-moon said he was “alarmed” by the new wave of violence in Gaza and called for “maximum restraint” on all parties to avoid a spiral.

The Security Council of the United Nations will meet on Thursday in an emergency session at the request of the Arab League.