BREAKING NEWS
Petroecuador’s IPO, good news for Wall Street
Contentious Electoral Tribunal notifies the CNE of the ruling in the Social Justice case
TCE refers a case of Social Justice for an electoral judge to execute a reparation sentence for candidacies, among them that of Álvaro Noboa
Citibank stopped payments on Isspol’s global investment notes to assist with the investigation
Ecuador presents public policy of accessible and inclusive tourism
Fundamedios supports the journalist who revealed the unusual requests in jail 4 in Quito
Ecuador beat Colombia in the Qatar 2022 Qualifiers
Cuenca receives international designation of World City of Crafts
Ecuadorian Lorena Bobbitt: ‘Escaping abuse is not an event, it is a process’
Ecuador would close the year with $ 2.3 billion in online sales, 15% more than projected 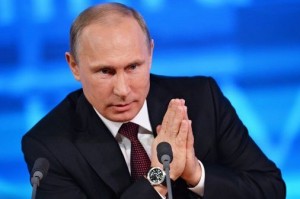 Russian President Vladimir Putin said this Wednesday, June 11 to the Ukrainian authorities that the final bid price of gas is $ 385/1,000 m3, and threatened to pass to “another phase” if Kiev rejects it.

“The final price is $ 385 per thousand cubic meters”, after a $ 100 rebate, Putin said at a government meeting, quoted by agencies.

In addition, he said that the proposed terms were “the same” that benefited Ukraine before the dismissal in February of pro-Russian Ukrainian President Viktor Yanukovich.

“If our proposals are rejected, we will move on to another phase, we have no choice”, said the leader, who accused Ukraine of carrying “to a dead end” negotiations because of their demands.

TCE refers a case of Social Justice for an electoral judge to execute a reparation sentence for candidacies, among them that of Álvaro Noboa