“We took the crown to Quevedo”, is the first thing Leyla Suken Espinoza Calvache said to her fellow countryman Saskia Sacasa, after hearing that the second runner-up for Miss Ecuador was María Luisa Corrales from Quito, and therefore between the two from Rio de Janeiro he had to choose the new sovereign of this beauty pageant developed in Manta. amidst biosecurity measures such as COVID-19 prevention. 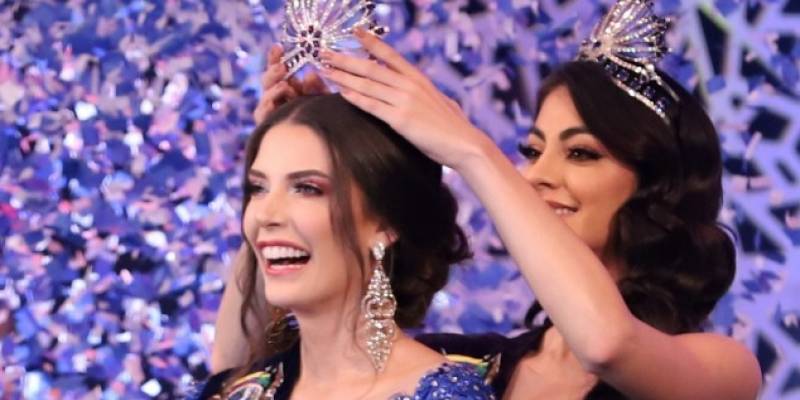 At 23 years old, 1.72 meters tall, an emelecist, international business student and of Japanese descent (on the part of his grandmother), Espinoza surprised the qualifying jury made up of six people, three of them from Manabí, due to his fluency in answering on c HAT project would be the star that would lead should become the most beautiful woman in the country concerned which did not hesitate to answer that would be a support program inmiscuidas people in domestic violence.

Twenty candidates participated in the gala; After a selection by the jury, 10 semifinalists remained, but also for the first time through the vote via an internet page, a first finalist was chosen, and the most voted in that way was Keidy Boza from Balzareña.

The artistic evening developed at the foot of the beach in the Barbasquillo de Manta sector had a tropical style setting with palm trees and screens that allowed the more than 300 attendees to observe the contest.

Each candidate presented herself and showed the social program that she promoted at the time of the pandemic, in an organization that precisely because of COVID-19 modified its implementation and even the headquarters, because in the first instance it was planned to carry out in May in Portoviejo , a city that yesterday (this Sunday, October 18), he remembered his bicentennial of political independence.

One of the emotional moments that started the applause of the attendees was the intervention of the manabitas Roberto Rubén, Fernando Cargua and Wendy Gove, who interpreted the melody Resistiré , which included a tribute to the people who attended on the front line during the pandemic; The candidates, for their part, came out with posters to thank doctors, police, military, social groups, people who collaborated with food and others.

After the presentation in gala dress, the qualifying jury chose ten semi-finalists, whose number was reduced to six for the final, a group that Boza joined. Claudia Schiess and Carlos Andrade , the animators, were naming the position in which the finalists were left.

Espinoza took a crown valued at $ 15,000 designed by Cristian Quinteros , made of fine silver and where 140 carats were used in semi-precious gems and 96 selected pearls, as well as a car and other gifts.

The Quevedeña in her first words to the journalists who covered the event was that she worked hard for several months with five Venezuelan advisers and an Ecuadorian and that the preparation for the Miss Universe event will also be intense, so much so that she will momentarily stop studying international business in the University of the Americas in Quito, the city where he currently resides.

” I am very proud and happy to be the first Quevedeña woman to win Miss Ecuador, it is a pride for my land,” said Espinoza, who this week already has a full schedule of interviews and activities in Guayaquil and who will be the next week you visit your home province.

He said that he always dreamed of participating in a tournament to represent Ecuadorian women, their culture and gastronomy and pointed out that Ecuadorians must reinvent ourselves above all to face the difficult situation of the pandemic.

The Venezuelan Sabrina Cira led the group of four Venezuelans and an Ecuadorian who since February collaborated with Espinoza, whom she said is an excellent person, simple and has a lot to give in beauty events.

“I had no knowledge or experience of beauty events, despite this the goal was achieved, everything was worked on, catwalk, public speaking, makeup, wardrobe, marketing and everything necessary for her to be able to take the crown “, declared Cira , who arrived in Ecuador five years ago, due to the Venezuelan diaspora in the face of the crisis in that country.

Cira said that there in her country she collaborated with the organization of Miss Venezuela, but after her departure she dedicated herself to other work activities in Ecuador and said that the reign that Espinoza obtained is her first experience in beauty events in the country, ensuring that for the Miss Universe will join other people to help Espinoza to fulfill a more than decent participation. (AND)