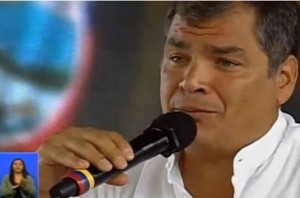 The Regime measure forces in the country’s streets once more. President Rafael Correa announced on Saturday April 2, 2016, he will be at the concentrations to defend the “citizens’ revolution.” This, in response to announcements of demonstrations held by various sectors for the package of tax reforms the government sent to the National Assembly.

“They will march defending the cigarettes, alcohol and soft drinks. Perfect, we will also march and we will be more, many more,” said the Head of State during the weekly address, broadcast from Conocoto, in the southeast of Quito.