Two detainees upon their arrival at the terminal with $ 35,520 in counterfeit money 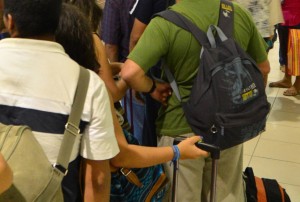 A black suitcase with counterfeit US dollars (35,520) was discovered in the interior of the bus terminal by a team of agents of the Investigations Branch against the right to property of the National Police (Sidprobac).

In the operation, the agents arrested Raul M.Q., 41, and Paul V.P., 36, who according to classified information, would arrive to Guayaquil coming from Machala, bringing, according to a police statement, “a considerable amount of counterfeit US dollars in order to introduce them in the market and thus defraud citizens.”