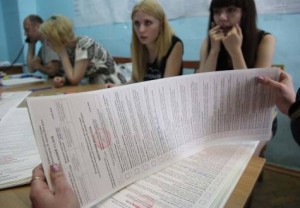 Ukraine expects to elect its new president today, because holding elections in three weeks could cause a boycott of the insurgents, who founded a new independent republic yesterday: Novorossia (New Russia).

“Stop the war. Choose the president in the first round,” says the campaign of oligarch Petro Poroshenko, the favorite according to the surveys.

Yesterday , the Russian President Vladimir Putin declared that the choice of the Ukrainian people will be respected. Meanwhile, Ukrainian Prime Minister Arseniy Yatseniuk, said: “It is going to be the expression of the popular will of the Ukrainian west, east, north and south. Elections will be free and fair. We haven’t let the bandits and mercenaries financed from the exterior abort our elections.”

This, in context of what Ukraine experienced yesterday, with a tense day of reflection because of the attempts of the rebels to thwart the electoral preparations by kidnapping members of electoral commissions or requisitioning electronic equipment.

Around 100,000 effectives will ensure security in an election in which there are about 33 million Ukrainians who will vote.