Referendum in Crimea moves the population and affects tourism 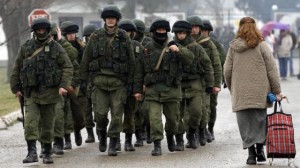 Crimea will decide its future in a referendum this March 16th

Saturday morning in the capital of the Autonomous Republic of Crimea. In front of the Alexander Nevski Cathedral passes a demonstration chanting loudly ” Crimea to Russia.” Behind, a multitude comes up with another slogan:                 ” Crimea to Ukraine” . This is the atmosphere on the eve of the referendum that mainland authorities called on March 16th. The poll to decide whether Crimea wants to join Russia or to remain dependent of Kiev is illegal under the laws of Ukraine, and it is recognized only by Russia.

In Yalta, the tourism capital of Crimea , there is great concern about the future of the local economy, which depends on summer season. “Instability drives off tourism” , It is just left to tohink f Abkhazia ( independent republic located on the southwestern slope of the Caucasus mountain range , bordering the Black Sea , and whose capital is the city of Sukhumi. ) ,” Referring to the Black sea coastal region that declared its independence from Georgia.

Assembly resumes activities with several themes on the agenda

Baby Gorilla from the Safari Park Zoo in San Diego, was born by caesarean