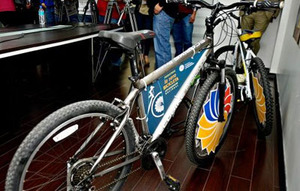 Ecuador will manufacture their own bicycles

The Mininster of Industries, Ramiro Gonzalez, announced yesterday that in 2014 the Ecuadorian market will introduce 110 thousand bikes manufactured from domestic components. This is part of changing the production model to replace imports.

Gonzalez maintained that prototype bikes manufactured by companies that are part of the process are: Metaltronic and Ecobike.

While pointing out that the imports of 389 thousand bikes will reach a total of $ 18 million. The purpose of this is to replace purchases abroad and thus save foreign exchange and generate work.

The bicycles of Metaltronic will have 57% of domestic components. It will be made of carbon steel, according to Gonzalez is “much stronger than normal.” Their cost is $ 170 compared to $ 250 for buying an imported bike.

The project manager of Metaltronic, Ricardo Coronel, said that in December they will have a pilot batch of 100 bikes. He added that since March the manufacture would increase until all 100,000 units offered by their company.

Ecobike, will have the 46% of national components which already has a stock of 200 bicycles.

Next Friday will be the raffle of the world