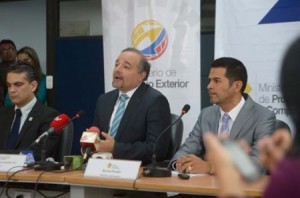 In 2 weeks the regulation for the 4×4 system of imports will be published in the Official Register, this establishes a rate of $ 42 per purchase made online via courier, said the Coordinating Minister of Production Richard Espinosa. The resolution takes effect 30 days after the publication.

Espinosa said that this system initially imported between $ 20 and $ 25 million; however, until December 2013 it reached up to $ 153 million.

Espinosa also said that they have been working with other ministries on a mechanism that allows Ecuadorians who live abroad, to keep sending packages.

For the Deputy Minister for Industry Byron Proaño, the decision of the Government responds to the need of protecting the textile and footwear industries, because of the total imports made by this way, 60% are clothing and footwear.

Books and medicines are exempt from this tax.

Spain is the EU country that covers most of Ecuadorian exports

Claro and Movistar express a view on salaries and profits