Rene Ramirez: I did not know my brother was applying for Yachay 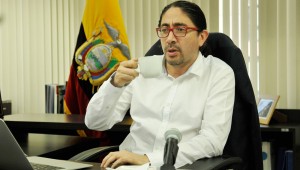 Rene Ramirez, National Secretary of the Secretariat for Higher Education, Science and Technology (Senescyt), defends the work carried out by members of the Management Board of the Yachay University, Jose Andrade, Ares Rosakis and Guruswami Ravichandran, and calls for time to be see the results. These were his statements in an interview with El Universo:

Were you surprised by the criticism of the functioning of Yachay made by its former rector, Fernando Albericio?

Since these new universities were born we have enforces the respect to their autonomy. I draw much attention that the former rector had voted 97% of the time in favor of all the decisions he then executed, and he himself says that there are problems. I think, to put it mildly, contradictory, paradoxical. So we asked for an audit to the Comptroller, and hence we will stand firm. We will take the decisions to be taken if there are irregularities.

What is the benefit of having professors who receive salaries of nearly $ 17,000 and live abroad?

It may be that this amount sounds huge, but the point is how much profit is bringing these $ 17,000 for the country. They have to attract donations from philanthropists, connect us with the world, and that issue is not made from here. You need the experience and an outstanding professional career. We are an academy that has been disconnected from the world and we need connection. So we saw the need for people who have a high level, who know and have managed to try to have a world-class university.

And this work justifies even having allowances of $ 300 a day?

We respect the university autonomy. Each institution shall determine whether they are legal, illegal. I can not supervise the subject of the allowances. Just imagine, I am the rector of the education system.

How did this link with Albericio arise in the beginning so now you say he has administrative shortcomings?

He has an impressive resume. (But) his management led to a non internal governance and a discrepancy between different actors such as deans and the managing commission regarding the type of university required. Albericio did a great job in the first phase, but this is a second time. We can not go at such a slow speed to get a world-class university in a hundred years.

How do you explain the hiring of your brother (Jaques Ramirez) in Yachay?

My family has always been academic. I did not know my brother was applying and Albericio saw his resume and says he has no regrets of having contracted him. By being the rector of the system, my staff and I are regulating everything. Under this logic, none of my family could work in any public university … If there´s any irregularity we will have to make the correct decisions.

How does Senescyt participate in dialogues for equity and social justice convened by the Government?

I have had meetings with rectors, students, university workers unions, and soon we will draw a platform for citizens to discuss the system improvement of higher education.

How can we speak about equity when there are such high salaries in Yachay and other public universities are not strengthened?

Any university can apply the same decree, this is not only for Yachay. It is a decision of the university.

Moreover, the fact that we have not strengthened other universities is not true.  The investment in the university system grew from 1.1% of GDP to 2.1% of GDP, we a have higher investment and there is an execution in $ 325 million in the university system. Then, when one lacks money, there is not a surplus. Yachay is a public university, previously we only had the possibility of having that level and infrastructure in private universities. In Yachay we are investing, the point is that who is attending Yachay Tech are low-income people.

Yachay, the tip of the iceberg