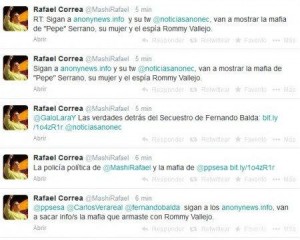 The Domestic Affairs Ministry assured that the person responsible for   having “hacked” the Twitter account of President Rafael Correa will be found.

The Domestic Affairs Ministry and the National Intelligence Secretariat considers that the action is a ‘threatening to internal and personal security of the President’ in one of the ‘direct communication vehicles with the public.’

The message published on Thursday afternoon was: “Follow Anonynews.info and its tw (Twitter) @ noticasanonec, that will show the Mafia of ‘Pepe’ Serrano, his wife and the spy Rommy Vallejo’ which was deleted shortly after of recovering the account.

Authorities suspect that the authors of this “hack” could be Anonymous.

Correa considered that the action came from “the extreme right of certain foreign countries in complicity with unscrupulous domestic opponents.”