Richard Espinosa: ‘If there is no funding, I have the money to pay’ 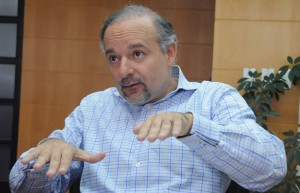 President of the Board of IESS Richard Espinosa aims to lower the dependence of health care provided by private clinics from $ 780 million to $ 280 million in 2017, he said in an interview with daily El Universo.

He explained that a sharp increase has been evident in the amount of referrals to private hospitals. “Recently we paid $ 100 million and now $ 780 million. Meanwhile, we povide more than 20 million medical consultations and the private sector 6.5 million, we allocate $ 1,080 million and they $ 780 million.”

On the Guayaquil hospital, he said it is awarded to the Sinohydro-Puentes consortium and the Machala hospital to the Makiber Sinohydro consortium. “The benchmark price of the Guayaquil hospital was obtained from the study commissioned to Elio Wong, who set it at $ 264 million; the Machala hospita is based in the Puyo hospital, that will build by the same company, and the Quito hospital is based in that of Guayaquil.”

On funding, Espinosa said, “But if there is not funding, I have the money to pay for it. But I´,m interested in getting this funding, because that is the constraint these companies determined, in order to make other works … “