Right to resistance, among the subjects that “bothers” Correa 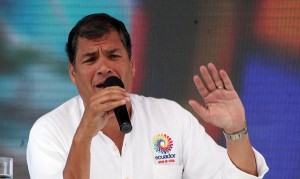 The inclusion and approval of the right to resistance in the Constitution of Montecristi was one of the issues on which President Rafael Correa declared himself opposed, recalled the former constituent Assemblywoman Monica Chuji.

During his weekly address, the president said it was an error to include it: “How I regret of having yielded,” and added that it was a novelty of Alberto Acosta.

Chuji said that the right to resist did not generate a public debate or caused controversy as other cases, but was one of the many issues that bothered Correa.

For her, the annoyance was because he wanted a constitution that facilitates the extractive effort, “that´s why he questions and denies the approved sections, but the right of resistance, he could not ignore that.”