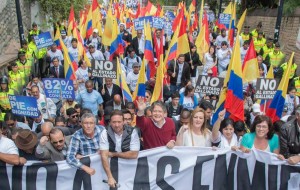 The constitutional amendments will come into second debate, and several sectors insist on calling a referendum despite the fact that in the demonstrations of last August the Government was demanded to file that project.

The Pachakutik movement, the Patriotic Society Party, the collective Compromiso Ecuador and the group Democracia sí insisted before the National Electoral Council (CNE) and the Constitutional Court (CC), since November 2014, to convene a consultation and one of the keystones of his proposals was the indefinite reelection.

Everyone is still waiting for an answer.