The Minister of Government,  María Paula Romo , has described the former president of Ecuador, Abdalá Bucaram , as cynics  ; the former Assemblyman,  Daniel Mendoza ; and  Jorge Chérrez , pointed out by the State for an alleged case of fraud against ISSPOL. 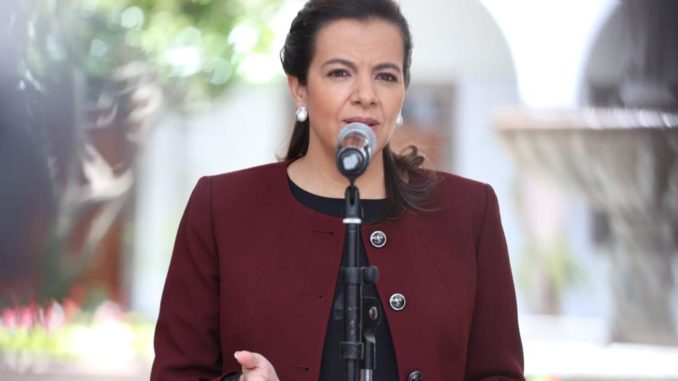 The minister from the Carondelet Palace, accompanied by President Lenín Moreno , responded in this way to the accusations and accusations made by  Bucaram ,  Mendoza  and  Chérrez  in the different cases in which they are being investigated.

According to  Romo , all three use their criminal proceedings to attack her. “The three in different circumstances, in their statements yesterday, have tried instead of explaining to the country, those facts for which they are being investigated, they have tried to attack me,” he said.

The former president of Ecuador, Abdalá Bucaram, in statements to the press yesterday, accused Minister Romo of undertaking political persecution against him and his family.

He also said that his son  Jacobo Bucaram , who was arrested on Friday, September 25, in Colombia, expelled from the country and prohibited from entering for ten years, was kidnapped by orders of the Ecuadorian authorities.

Given this,  Romo  has said that he is not responsible for the arrest or where Jacobo Bucaram is currently being held  . “In the first case the police act with orders from judges and they will continue to do their job.”

Jacobo  is in preventive detention in the Latacunga jail, for the alleged crime of organized crime. In addition, two other investigations weigh on him: for illicit association, related to the sale of medicines to hospitals in Guayaquil; and, for illegal trafficking of patrimonial goods.

Former Assemblyman  Daniel Mendoza , prosecuted for organized crime related to the failed construction of the Pedernales hospital, said yesterday in his early testimony to the State Attorney General’s Office that the Minister of Government,  María Paula Romo , “assured him that the appointment of  Tito Nilton  (as governor of Manabí)  would take office after the Assembly filed the case against him »

This was not denied by Romo but he said: «In Mendoza’s case there are no elements that he has not already commented on. With regard to my job as a government minister, it has always been to hold conversations with all political actors but in none of those conversations is it about illegality, is it about a contract or is it about money, as revealed by criminal investigations.

Mendoza  added in his testimony about the ” existence of political quotas in exchange for the organization of the Legislative .” “There was always an advisor who served as a bridge between legislators. When Paúl Granda was in the Ministry of Politics, that person was Paúl Bejarano. In the case of the minister, it was Fausto Holguín, “he said.

Romo maintained that “Mendoza continues to mention my name in revenge because I was the one who denounced him. What he has said, and should be investigated, is that he has committed a series of crimes in the National Transit Agency, ”and he reiterated that it was she who initiated the process in the Pedernales case.

Jorge Chérrez  is accused by the Ministry of Government as responsible for the loss of more than 500 million dollars in investments, from the funds of the  Institute of Social Security of the Police   (ISSPOL). In one case that has been branded as a scam.

Chérrez  has ruled out, in different interviews with Ecuadorian media, that two investments made by (Isspol), for just over 500 million dollars, have been lost, diverted or constitute a scam. He has also said that the authorities have refused to hold a technical meeting on this case.

Today the minister referred to  Chérrez  as a clever swindler. “We will have to investigate other responsibilities of these smoke sellers. Chérrez must say where the bonds are and what has been transferred to the account of the Central Bank of Ecuador, only then could he deny what we have discovered, “said Romo.