Assemblyman Ronny Aleaga received a warning from Correismo . The legislator of the Union for Hope ( Unes ) confirmed this Friday, July 8, 2022, the sanction of the Citizen Revolution movement. The notification of the political group was given by the photograph that was spread, where the Guayas parliamentarian appears in a pool with people required by the United States Justice. 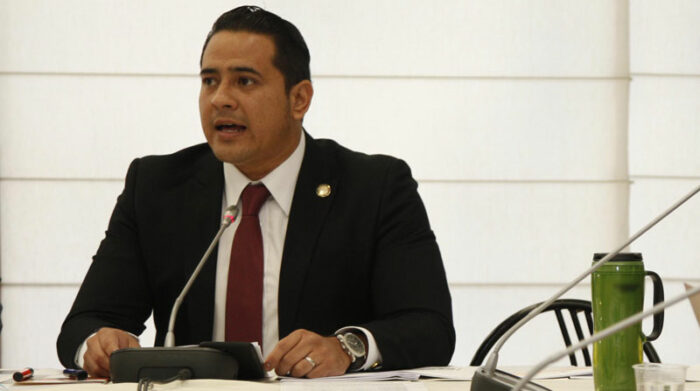 Assemblyman Ronny Aleaga said that Correismo sanctioned him for the photograph in which he appears meeting with fugitives from US Justice.

“Within the process of the Ethics Committee of the Citizen Revolution, I have been notified with a written reprimand for behavior, apparently for the movement, of being in a space that does not belong to me,” he said.

He assured that he has certificates from the State Attorney General’s Office, the Judicial Council, that he does not have an investigation of any kind for alleged drug trafficking, organized crime, or illicit association.

“A photograph proves absolutely nothing. If there is a link in these alleged crimes, that person who has vociferated so much that he has the evidence, has not presented a single piece of evidence until today, ”he said.

Aleaga summoned the president of the Control Commission, Fernando Villavicencio (ind.), who is investigating this issue, that “if he is so certain and sure (that he is involved), file the criminal complaint, but acknowledge with signature and rubric.”

“In a rule of law we cannot want to relate the issue of personal behavior in a private activity, to trying to link with an image in matters of serious crimes, generating hatred, rejection,” he noted.

Aleaga insisted that the leaked photograph corresponds to a private activity, and denounced that a “media lynching” has been carried out against him.

“At the end of the day, as a politician you relate to many people. I am not for life asking people for police records, ”he stressed.

When questioned by the press that it was a meeting with people required by justice, he emphasized: “That is what you think, and here the citizen’s version has to be handled. And that’s my version. I am indicating that it was a personal activity, where he did not know the situation of the rest of the people.

Regarding the withdrawal of his hearing by the United States, Aleaga asserted that he has not received any version. “Other characters, public officials, have had their visas withdrawn without any explanation, how many are processed and detained?”

The legislator participated this morning in a meeting of benches with the president of the Assembly, Virgilio Saquicela.

Aleaga acknowledged in early June that he had a meeting with people investigated for criminal offenses. At that time he stated that it was an appointment to which he was invited by his girlfriend . The parliamentarian says that he was the victim of “media lynching.”

The image made Rafael Correa speak out for the fact, where he mentioned that Aleaga must answer to the Ethics Committee of the political movement for that image.

In the photograph that caused reactions in Correismo, Aleaga was captured together with Xavier Jordán , one of the people investigated in the corruption schemes in public health houses during the government of Lenín Moreno. The businessman is investigated along with Daniel Salcedo, Jacobo Bucaram and Paúl Granda , who was former president of the Social Security board.

Jordán is being investigated in a case of organized crime in the hospitals of the Ecuadorian Institute of Social Security ( IESS ) in Guayaquil , and has been a fugitive since 2020.

Jordán was also related to  Leandro Norero,  alias ‘El Patron’. The suspect has been detained since May 25, with three other people, including his wife and his brother. The sale of a property and a vehicle in the name of the Dymarla company, which would belong to his partner, Paulina J, is also being investigated.