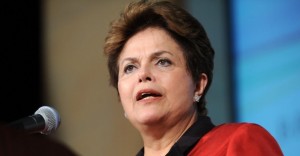 The President of Brasil Dilma Rousseff responded to the critics of the World Cup organization.

Delays in the works, protests and the lack of support from the Brazilian population to the event, draw attention few days before the World Cup.

The President defended the organization of the World Cup, at a dinner last Tuesday in the presence of a group of journalists from the international media in the “Palácio da Alvorada”.

Rousseff said that there have been more successes than mistakes, and she is convinced that in the end the Brazilian will surrender to the delights of soccer.