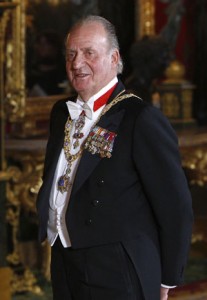 According to Article 56.3 of the Spain Constitution, King Juan Carlos would loose his inviolability, which he has enjoyed during his reign, due to his abdication to the throne.

A spokesman from La Zarzuela said  that maintaining the immunity to Juan Carlos would be “unconstitutional” and his gauging would be “reasonable,” so he can be judged, but only by the Supreme Court.

In Spain 10,000 positions (politicians, judges, prosecutors …) enjoy that privilege. Government sources indicate that the gauging of Juan Carlos could now be included in the reform of the Organic Law of the Judiciary or in a specific law.

The King communicated President Mariano Rajoy his decision to abdicate on March 31, and four days after, the government announced that the gauging of the Princes of Asturias and the Queen would be included in the complex reform of that law, something that could taken over a year.

Now this possibility is in the consultation stage. “There is no country that afore a minister and not the crown prince,” said Justice Minister Alberto Ruiz-Gallardón.