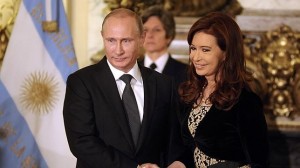 Russian President Vladimir Putin signed yesterday a series of agreements with Argentina’s President Cristina Fernandez, during his visit to the country as part of his Latin American tour.

Furthermore, agreements on extradition and transfer of sentenced people for the execution of criminal sentences deprivation of liberty were signed.

Today Putin begins his visit to Brazil, in the city of Rio de Janeiro, where he was invited by Dilma Rousseff and FIFA President Joseph Blatter to attend the final of the World Cup.

He will also be in Fortaleza, Brazil, for the preparatory meeting of the BRICS summit, a group of emerging powers that is integrated by Brazil, Russia, India, China and South Africa.