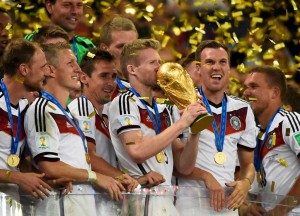 Germany is presented as the new champion, with a match that kept the expectation until the end, when with a goal from Götze, in overtime, the victory of the European country was defined.

During the first time, Germany had 63% of ball possession compared to 37% for Argentina, but during this time the selection of Argentina still controlled the game with several scoring chances undefined.

Gonzalo Higuaín in the 29th minute made ​​what could have been a goal for Argentina, with a pass from Ezequiel Lavezzi. But the play was annulated  because it was an offside.

From the second time, Germany organized better its defense and during overtime in the 112th minute, Mario Götze put the 1-0 that made them champions.

With this game, four are now the World Cups won by Germany, being overcome only by Brazil, which has five.