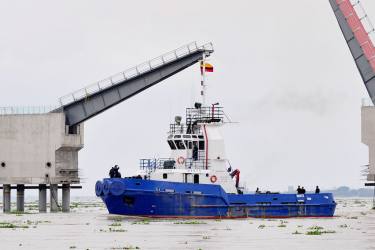 Yesterday, at 15:00 the Bridge that links Guayaquil with Santay Island from El Oro street began to activate. The two arms that connect the separate step started to  leave an open groove.

Several boats crossed below the bridge, including: The tug Marte (which belongs to the Superintendent of Balao Oil Terminal), a Navy Missile ship and another fishing boat, which was moored in a dock of the García Goyena street.

After the boats passage, the two arms of the bridge fell back slowly, it took almost five minutes the junction of both.

Furthermore, shipowners that use the route are waiting for the opening of the pedestrian bridge that is already finished.

Days ago, the Minister of Environment, Lorena Tapia, indicated that the opening of the bridge will be possibly in July.