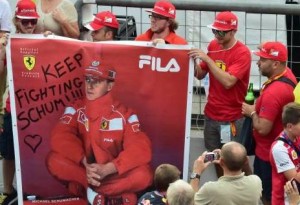 Michael Schumacher left the hospital where he was in and will continue his recovery at home, but the former champion of Formula One faces “a long and difficult road ahead” after a skiing accident last year, said a statement on Tuesday .

“From now on, the rehabilitation of Michael took place at home. Considering the serious injuries he has suffered, advances have been made in recent weeks and months,” said the brief statement issued by the manager Sabine Kehm.

“There is still, however, a long and difficult road ahead,” said a spokesman for the University Hospital of Lausanne who confirmed that the German 45, who has won seven times F1 world championship, had left the hospital.

Schumacher suffered serious head injuries in a skiing accident in the French Alps in December and was taken to Lausanne in June after leaving the coma. He received treatment to stimulate his senses at a specialized section of the hospital.